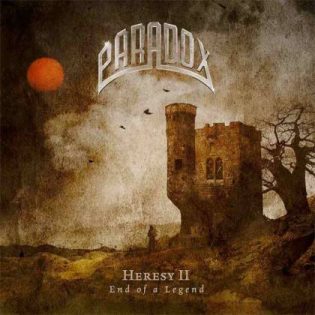 01. Escape From The Burning

04. Children Of A Virgin

Perennially overlooked and criminally underrated, PARADOX are a thrash metal band of rare distinction, with one of the most consistent catalogues around. Thrash diehards will almost certainly be familiar with 1990’s seminal “Heresy”: a towering, exploratory concept work devoted to the story of the Albigensian Crusade, wherein Pope Innocent III embarked on a vicious campaign of religious persecution in the 13th century. PARADOX were never likely to challenge the Big Four for commercial clout, but “Heresy” remains a gleaming gem in the thrash metal canon. Three decades on, we have a sequel, and it’s an absolute colossus. 75-minutes deep and even more crushing than 2016’s similarly excellent “Pangea”, “Heresy II: End Of A Legend” is the kind of bold and adventurous statement that fans have long come to expect from the German crew.

Ignoring the fact that PARADOX have always been this good, the band’s eighth full-length feels momentous and timely; arriving during thrash metal’s richest period in recent memory and sounding utterly authoritative from start to finish. Epic opener “Escape From The Burning” and the furious “Mountains And Caves” may be enough to convince most people to stay the course, because both are brimming with classic thrash tropes, but all underscored by a broad progressive streak. In much the same way that the latest FLOTSAM AND JETSAM album nailed the balance between old school and cutting edge, the likes of “Journey Into Fear” and “Unholy Conspiracy” are pointedly contemporary in both attack and production, but the feral spirit of the good old days is still holding the reins here.

The most startling thing about “Heresy II” is how it negotiates its lengthy duration without missing a step or losing pace. Razor sharp and technically flawless, more brutal fare like the breakneck “Burying A Treasure” provides the muscle and meat, while the more expansive, melodramatic likes of nine-minute monolith “A Meeting Of Minds” provides the atmospheric sizzle. Perhaps surprisingly, this marathon opus gathers momentum and becomes ever-more fascinating as it builds towards its bombastic climax. When the end does arrive, PARADOX bow out with “The Great Denial”: a thunderous, multi-riff sprawl with an enjoyably gritty vocal from the ageless Charly Steinhauer, an electrifying sense of dramatic tension and one particularly mind-bending lead break from virtuoso guitarist Christian Münzer. The grimly dreamy epilogue that follows (“End Of A Legend”) is a neatly evocative touch, too.

Worth far more than an occasional footnote, PARADOX are masters of forward-thinking thrash and this is, as fans will attest, yet another glowing example of that mastery. It’s also a seriously convincing sequel to an unsung classic. The crusade goes on.