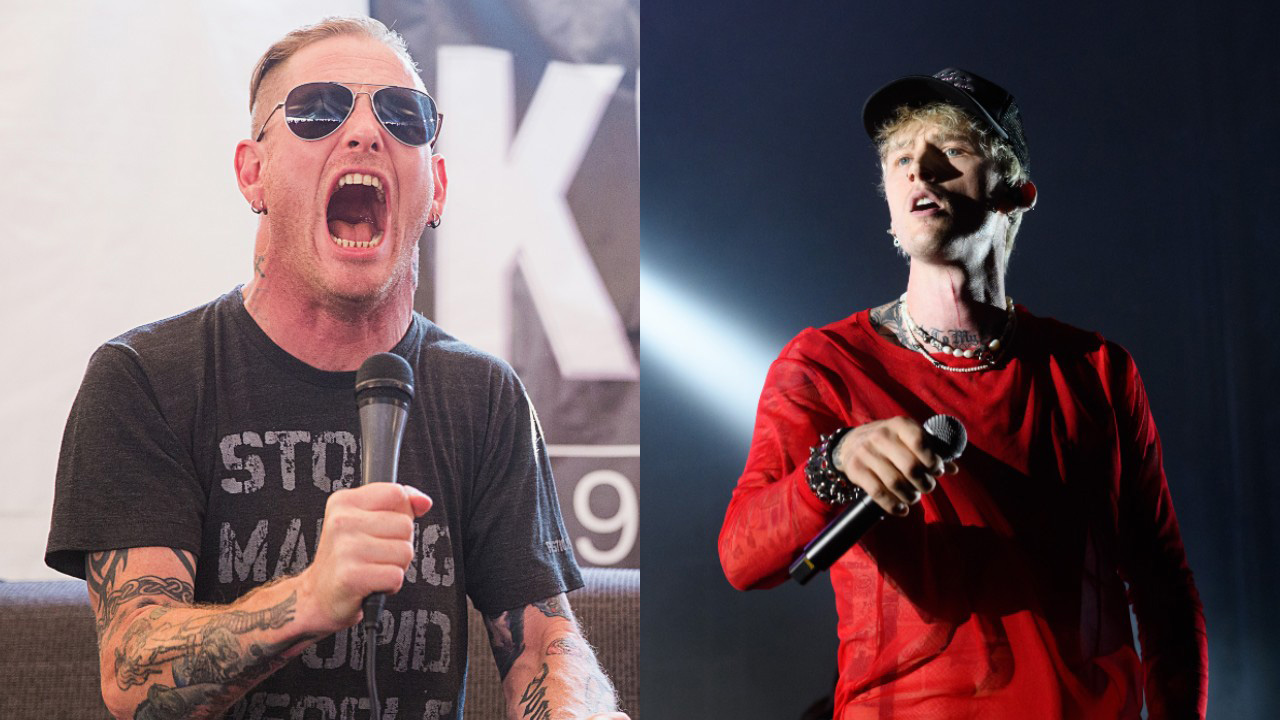 Machine Gun Kelly ignited the wrath of maggots everywhere this weekend, after he made fun of Slipknot while on stage at Riot Fest, referring to the band as “50 years old wearing a fucking weird mask on a fucking stage.”

It’s thought that Kelly’s comments were made in response to an incident that happened back in February, when Corey Taylor told the Cutter’s Rockcast “I hate all new rock for the most part. I [hate] the artists who failed in one genre and decided to go rock – and I think he knows who he is.”

While Taylor stopped short of naming Kelly, you didn’t have to be Columbo to work out who he was talking about.

Now, after copping a whole lot of internet flack following his outburst – Kelly has taken to Twitter to clear up what prompted his words. According to Kelly, Taylor’s original diss followed the Slipknot singer recording a “fucking terrible” verse for Kelly’s Tickets To My Downfall album, which had to be discarded due to its poor quality. According to Kelly, this altercation left Taylor feeling “bitter”.

corey did a verse for a song on tickets to my downfall album, it was fucking terrible, so i didn’t use it.he got mad about it, and talked shit to a magazine about the same album he was almost on.yalls stories are all off. just admit he’s bitter.September 20, 2021

However, hitting back with “receipts” consisting of screenshots of a private email exchange, Taylor has since suggested that Kelly might be twisting the truth around what really went down.

Sharing the screenshots on Twitter, Taylor wrote: “I don’t like people airing private shit like a child. So this is all I’ll say: I didn’t do the track because I don’t like when people try to ‘write’ for me. I said no to them. So without further ado…. #receipts. This is all I’m going to say about it”.

The first email revealed that both Travis Barker – who worked on the record with Kelly – and Kelly himself actually loved the vocals that Taylor sent to them, and that the rapper thought “he fucking killed it”. It was also noted that Kelly was “stoked” and “honoured” to have Taylor be a part of the project, adding that he extended the song with an extra bridge and a second half to Taylor’s verse, hoping that the he would record that in the vocal style that he used on Slipknot’s Psychosocial.

The second email displays Taylor’s response to the first exchange, and also sees the frontman refusing to be a part of the album due to creative differences. It reads: “So I listened to the ideas and to be honest, I don’t think I’m the right guy for the track. Nothing personal, I just think if this is what MGK is looking for, someone else is the guy to do it.

“It’s all good and I’m stoked for him — I hope you guys find the right fit for it. Hope you understand and I wish you guys the best with it. If I can help in any way, let me know.”

I don’t like people airing private shit like a child. So this is all I’ll say: I didn’t do the track because I don’t like when people try to ‘write’ for me. I said NO to THEM. So without further ado…. #receiptsThis is all I’m going to say about it. pic.twitter.com/pkhweg1PtnSeptember 20, 2021

Taylor is yet to acknowledge Kelly’s response.

This isn’t the first time Kelly has gone head-to-head with another artist, and follows a highly-publicised spat with rapper Eminem. After calling Eminem’s daughter “hot” in a tweet, Eminem banned Kelly from his radio station and the pair proceeded to take shots at each other via a series of diss tracks.