Danko Jones: conquering the world one riff at a time

Danko Jones: conquering the world one riff at a time 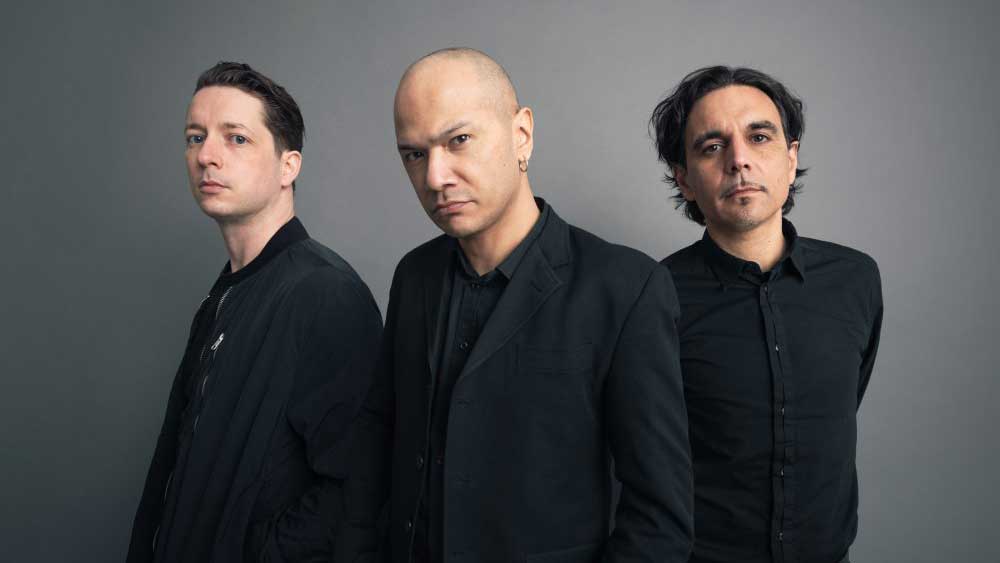 Danko Jones is, by his own admission, a rock’n’roll lifer. Hooked on Kiss when he was six years old, and having expanded his musical repertoire ever since, he’s spent the better part of a quarter-century touring the world with the band that bears his name, playing alongside Beck, Guns N’ Roses, Motorhead, Nickelback and others.

But like just about every other musician, Jones’s plans for the future were derailed when COVID-19 hit in March 2020. With no live work on the horizon and no plans to make a new record (at first, anyway), he found himself with an abundance of time to devote to his successful podcast series, or maybe flexing his love for rock in columns for publications such as The Huffington Post or the Toronto Star. At least that was the plan.

“I have to be honest, I haven’t done shit!” he admits frankly. “I’ve been living in anxiety hell.”

It’s difficult to imagine the man behind records like We Sweat Blood and Sleep Is The Enemy doing absolutely nothing for the better part of a year. Like many of us, however, Jones spent much of the pandemic in a doom-overloaded fugue state. Podcast on pause, unable to muster the energy to check out new releases and actively downsizing his record collection, there was a pervasive sense of defeat while Jones waited for life to return to some kind of ‘normal’.

“JC [bassist John Calabrese] gets all the credit for this album,” Jones says of Power Trio. “He was the one who said: ‘We need to just do something.’ I was in the mode of curling up in bed and didn’t want to come out until this thing was over.”

In June 2021, with hospitalisation numbers dropping and vaccination levels rising, things finally began to look brighter – for both Danko Jones and the planet. Fittingly, Power Trio, the band’s tenth record feels like a triumphant comeback, with opening track I Want Out bringing the band roaring back to life, every bit as vital as they were before the pandemic hit.

But while Jones seems entirely unabated, in conversation he still puts weighted consideration behind every response, which suggests he’s still coming to after a rough year. But then, that’s exactly why Power Trio feels so magic – it speaks to rock’n’roll’s power of reinvention.

Long before he gave his name to a riproaring rock’n’roll band, Danko Jones was a music-loving kid from Toronto. A love for hard rock in his childhood gave way to fascination with the raft of garage rock bands making their way north of the border in the mid-90s. Bands like The Oblivians, The Makers and The Gories inspired his decision to drop out of film school just a few credits short of graduating, to pursue an entirely different education.

“I realised if I didn’t at least try to do this music thing I’d end up kicking myself,” he says. “Even if I did it for a year and a half and had to give it up, at least I tried.”

Jones’s first foray into music was as one half of garage-rock duo the Violent Brothers. It was in this group that he developed the larger-than-life persona that later became his trademark. All it took was a baptism by fire at their first ever show.

“We were playing in the back of this tiny club called the Cameron House,” Jones recalls. “It was so small there were people on chairs – this effete poet vibe while this garage band played in the corner. Our friend Bernie [Pleskach] was in the crowd. He’s an incredible musician who was in these bands The Stinkies and Satan’s Arch-Enemy G.O.D, this real character with loads of energy.

“Well, Bernie was drunk and took a seat in front of the stage and just kept shouting; you could call it heckling. But I was getting pissed because he was being so loud, so I started biting back. He loved it – and it turns out so did I! We started going back and forth and that was it – each set I’d be screaming at people, and the reaction I got was different to any of the noise rock bands I was in at the time, or any rock’n’roll I’d done… I found I could surf it easily, no matter what people threw at me.”

Jones combined roguish charm, humour and theatricality in a mix that was equal parts Big Bopper, Bon Scott and Phil Lynott. More shows with the Violent Brothers enabled him to hone his craft, but his reinvention wasn’t complete until the formation of his next group.

Working alongside musicians John ‘JC’ Calabrese and drummer Michael Caricari, the group were initially named Danko Jones And The Impossible Dream, which eventually was shortened to just Danko Jones. This wasn’t an ego trip on Jones’s part – the name change was actually suggested by Caricari.

“People think it’s a solo act, but it’s not,” Jones explains. “JC and I have been together from the start, and behind the scenes everything is equal. Sometimes I wish it weren’t such a democracy, as that means things take longer as you wait to get everyone’s opinions, but ultimately I’m glad it is. I don’t wanna be in a band where there’s one person who doles out the roles.”

The person on the drum stool might have changed over the years, but at its heart Danko Jones [the band] has always been a trio. Which brings us back to the pandemic. While his frontman was flagging creatively, JC was laying plans to help the band return to active duty. The first step was setting up ways for the trio to write and demo material separately from home.

All of their previous records had been written in a room as they jammed together, a throwback to their garage roots and staunch early stance that they would never even release a record.

Twenty-five years and nine records had proved that statement false, but there were still some misgivings about writing separately. Fortunately they had plenty of time to iron out the kinks, and soon not even aging technology could stand in the way of progress as they wrote and completed their first song from scratch in the pandemic, Blue Jean Denim Jumpsuit. Not so much Bambi-steps into the new world as a joyous leap into urgent classic rock riffing, the song set the tone for an entirely new mode of operation going forward.

“Once it had been put together properly I was floored,” Jones beams. “I think it sounds more organic than songs we’ve done in the past where we were all in a room together! It’s given us some relief – during the pandemic, Rich moved to PEI [Prince Edward Island], a different province on the other side of the country. If he’d done that a year before I’d have had a nervous breakdown. But now it’s all good.”

Even when it came to rehearsing ahead of going into the studio, the band weren’t able to fall back into old modes of operation. Once again, though, JC swooped in with a solution that let them forge ahead.

“JC set up a rehearsal space so he was in one room, and then Rich and I were in another room, with a partition down the middle,” Jones explains. “We never even saw each other! We’d practise and practise, shouting to each other if there were any problems. I finally saw them in the recording studio. Even then, there were only five of us in the studio. It’s insane and I can’t believe we did it.”

Despite being written under strenuous circumstances, the 11 songs of Power Trio roar with the sort of freedom that can only be found after experiencing the alternative. I Want Out, Get To You and Let’s Rock Together evoke the essential spirits of rebellion and community that engender rock’n’roll as a whole.

Elsewhere the staccato frenetic riffs of Flaunt It evoke Scandi-bop rockers like The Hives or Royal Republic; anachronistic hard rock that could have been released anywhere between 1950 to today. Perhaps the biggest surprise (thematically, at least) is Raise Some Hell, a fist-pumping anthem that originated from Jones’s feelings about the 2020 Black Lives Matter protests. Make no mistake, the man who sang Legs and Success In Bed hasn’t suddenly decided to trade in political manifestos, but after the past 12 months he also felt that he couldn’t just stay silent either.

“When the BLM demonstrations were happening, I wasn’t comfortable gathering in crowds – there just wasn’t enough data to support it being safe,” he admits, pausing even longer as he considers his words very carefully. “In a way, Raise Some Hell was a way for me to participate. At the same time, I didn’t want it parading down main street that the song was inspired by George Floyd or BLM. But I’m not backing away from it. It gets to a point where if you’re quiet then you’re almost complicit to what’s going on around you.”

While that song itself isn’t any more overtly political than your average Motorhead song (and they had more than a few political ones in their day), it calls for unity across all divides.

“I just want… can we not be racist? That’s it!” Jones says. “Don’t be sexist, homophobic… Let’s all just rock out. Songs like Let’s Rock Together are inspired by that as well – for all sides of the political spectrum to come together.”

As with all other things Danko Jones, this plea for unity comes wrapped in a package of rock’n’roll worship that ultimately triumphs over all. This is demonstrated most notably on the record’s final track, Start The Show, a thumping rocker that shares some DNA with AC/DC, right down to the stomping riff and ‘Ain’t rock glorious?’ lyrics. So naturally they brought in ex-Motorhead guitarist Phil Campbell to play the breakout solo on the track.

“JC said: ‘If the album is going to be called Power Trio, why shouldn’t we get the guitarist from arguably the greatest power trio there ever was?’” Jones says. “Luckily he agreed!”

It works perfectly as the final flourish on a record that harkens back to the glories of over sixty years’ riffing and rocking. As it turns out, it’s also an urging for the world itself to bounce back.

“Songs like I Want Out and Let’s Rock Together could only have been birthed from the pandemic situation,” Jones offers. “The album ends with Start The Show, the wish of starting everything back to normal.”

Right now, nobody knows what ‘normal’ will look like when it returns, but Danko Jones paints an alluring picture. It might have started out as an impossible dream, but the band have spent 25 years turning such dreams into reality.

“I met Axl Rose on stage, on his stage, in Saskatoon to sing the chorus of Night Train with him,” Jones marvels. “Singing Killed By Death with Motorhead was a huge moment – I was on cloud nine the first time we did it. It’s one of my favourite Motorhead songs.”

“It’s a tightrope to walk, but I go by a compass that allows me to look at myself in the mirror,” he says, smiling. “In our twenty-five years there’s no time where it’s so bad it’s like, ‘I don’t want to be reminded of that’, except maybe times where a joke hasn’t landed with an audience. Hell, I even finally got my film degree last year!”

Twenty-five years into their career, Danko Jones serve as both a glorious throwback to rock’n’roll’s history and a reminder of its enduring legacy; as long as there are bands willing to preach the gospel, and disciples like Danko Jones to make it sound good, the dream will never die.

Power Trio is out now via Made In Germany.