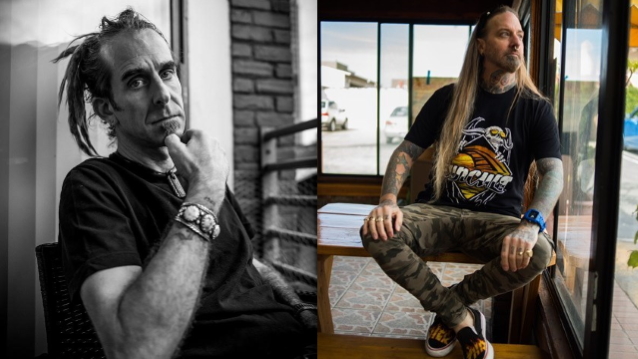 Metal singers Dez Fafara and D. Randall Blythe abide by the maxim to “put your money where your mouth is” with Chakra Coin, a new cryptocurrency designed to foster community and invest in charitable causes.

Longtime friends, both frontmen earned gold records with their respective bands and share unwavering commitments to artistic integrity, with a progressive outlook and attitude about the world around them. While it is a deflationary token allowing for passive income generation, the core Chakra Coin team pledge to donate a portion of profits to various causes and hope to encourage the whole community to do the same.

“I’m a believer in Chakra Coin,” explains Fafara, best known as the frontman for DEVILDRIVER and COAL CHAMBER and a co-founder of The Oracle Management, representing extreme music titans like CRADLE OF FILTH and JINJER. “We started this venture to create a community of giving back and paying it forward. I will donate partial proceeds to multiple charity organizations. I hope that everyone who participates in Chakra Coin will do the same, creating a better world and a more cohesive existence for everyone involved.”

Chakra Coin is a decentralized, deflationary meme token. It is similar to Shiba Inu, Safemoon, and other cryptocurrencies that took the global financial ecosystem by storm after early adopters of these tokens saw their value skyrocket in a relatively short time span. Chakra Coin combines profitable yield generating DeFi and safe store-of-value, a gas-free cryptocurrency free from friction and borders. Its stated disruptive aim is to help usher in a fairer economic standard of living. Chakra Coin is also a fully community-owned token.

“The potential of blockchain technology, including DeFi and cryptocurrencies, to create a more equitable system of wealth distribution is extremely intriguing to me,” offers Blythe. “It is my hope that being involved on the ground floor with a cryptocurrency community that holds a charitable component as one of its core tenants will be one small step towards creating a fairer, more altruistic economic system for everyone.”

Blythe‘s band, LAMB OF GOD, earned five Grammy nominations across eight studio albums. LAMB OF GOD toured with METALLICA, SLAYER and SLIPKNOT as they ascended to the top-tier of modern metal bands; they recently wrapped a U.S. tour co-headlining with MEGADETH. Blythe is also an accomplished photographer and bestselling author. In addition to sharing stages together, Blythe and Fafara are partners in the SunCult surf wear brand.

Both are quick to point out that they are not financial advisors, and they encourage their friends, peers, and fans to conduct their own consultations with qualified advisors about Chakra Coin, or any investments. At this time cryptocurrencies are still highly volatile, and no one should invest money they can’t afford to lose into any sort of asset, cryptocurrency or otherwise.

“Dogecoin, Shiba Inu, Safemoon, and all of the stuff happening with cryptocurrencies is immensely exciting,” adds Fafara. “My hope is that Chakra Coin will encourage others to share the wealth with the less fortunate.”