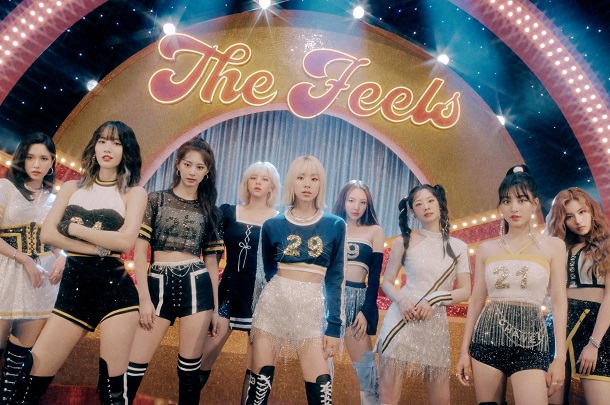 Though they’re undoubtedly one of K-pop’s most popular acts, the idea of Twice expanding into the Western market has always felt a little iffy to me. For whatever reason, international fans tend to flock toward darker, edgier concepts. Twice’s music is often bubblegum in execution, which may reinforce negative K-pop stereotypes held by more skeptical listeners. But, the group has already seen massive success in Japan (where bubblegum is certainly not a liability!), so it’s only natural they’d get around to an English-language single eventually.

Going into my first listen of The Feels, I tried to imagine this was some new girl group I’d never heard of – that I was an insulated pop fan who had no real interest in K-pop. With that mindset, I’d likely enjoy a cursory view of the music video before moving on to other things. I doubt I’d have much curiosity about the group, apart from wondering which Disney Channel original movie the song may have stumbled out of.

Of course, most of us come to The Feels with a years-long history of Twice singles. There’s no reason for this song to be performed in English (“the feels” sounds like some unfortunate disease), and I doubt it’s going to win over any new converts. But, it’s a solid Twice track that blends their past with their present and wraps it in a retro bow. The melody has a nice vamp and is strongest when it jettisons the cutesy affectations and goes for the pop jugular. This is most successful during the chorus, which opts for a series of ebullient refrains. It feels like diving into a vat of cotton candy – a heady sugar rush. However, I prefer my sugar with some bite, and I wish The Feels delivered some of the icy cool that made I Can’t Stop Me such a treat last year.

The song’s trendy bassline sets things off on the right foot, forging a sturdy backbone for the verses. The percussion becomes brisker as this segment develops, previewing the explosion of energy that marks the chorus. An injection of synth makes for an exciting centerpiece, though I wish it had been turned up even louder in the mix.

Knowing my taste in pop music, I feel like I should absolutely adore The Feels. It’s a well-written, well-constructed pop song and Twice totally sell it. Yet, much like the English-language BTS tracks, it comes across as too sanitized – a means to and end rather than an expression of what makes this group incredible. But as modern pop products go, I admire The Feels’ unflinching will to embrace a big chorus and buoyant instrumental.