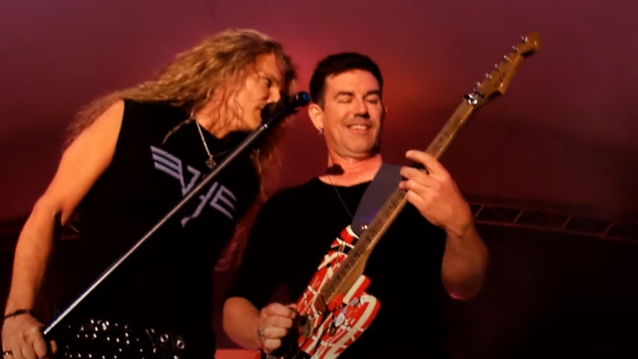 Multi-camera video footage of MITCH MALLOY’S VH EXPERIENCE performing the VAN HALEN classic “Hot For Teacher” at the Destin concert can be seen below.

Malloy told the story of his day at Eddie Van Halen‘s 5150 studios to Melodic Rock: “A guy who worked for their management at the time used to be my road manager and he kept calling me and telling me they were going to fire Sammy and that I was going to be the next singer in VAN HALEN. And he was calling and calling and finally I got annoyed by this and told him to stop and that I didn’t think I was a good fit in VAN HALEN and that if he was serious, he should have Ed call me. A week later, Desmond Child calls me and says he has just left Ed‘s house and was writing with them and that they were talking about me and that they were watching my ‘Anything At All’ video, and that he told them that I was perfect for them, and that they would be lucky to get me. And before I knew it, I was on a plane to L.A. Ed did call, a bunch of times. He was great.”

According to Malloy, Eddie told him he was in the band on his third day in the studio. But when Eddie, Michael Anthony and Alex Van Halen stepped onstage with their estranged singer David Lee Roth for the first time in 12 years at the 1996 MTV Video Music Awards, Mitch knew that his dream gig had fallen apart.

“I’m sitting, watching TV there by myself,” Mitch told Rolling Stone. “It wasn’t good. I think literally, my jaw dropped. So in that moment, I was shocked. And you know how sometimes as humans we just know some things? You just know it. You don’t have to say it. Nobody has to say anything. People just know things. And that moment that Roth walked out behind them, I knew it was over. I am not going to be in VAN HALEN. I just knew somehow. And so that was it for me. I was just like, ‘That’s it. This can’t happen now.’ I just knew it. It was just … a wall came down. But it just felt like it was over, somehow. It was like, ‘This can’t work now.’ Not because people won’t accept me. But there’s just something else going on that I didn’t even fully understand at the time. You know what I mean? It was like a knife sliced through and just, it was over. I think it’s the only time it’s ever happened to me in my life, where it was that definitive. And I had a lot going on at the time, aside from VAN HALEN. Real promise with my career moving forward. So it wasn’t, for me, my only thing. I wasn’t like, ‘Oh, my God! This has got to happen,’ kind of thing. Of course, I really did want it to happen. But who wouldn’t?”

VAN HALEN‘s next singer ended up being Gary Cherone, former frontman for the band EXTREME. His only album with the group was “Van Halen III”, which was a critical and commercial disappointment. Hagar and Roth both rejoined VAN HALEN at various points since 2003, with the latter appearing on VAN HALEN‘s final album, 2012’s “A Different Kind Of Truth”.

Malloy‘s involvement with VAN HALEN is the focus of a short documentary, “Mitch Malloy: Van Halen’s Lost Boy”, which was uploaded to YouTube in 2013.

In 2018, Malloy joined GREAT WHITE as the replacement for Terry Ilous.

Mitch relocated to Destin, Florida from Nashville, Tennessee in 2019.