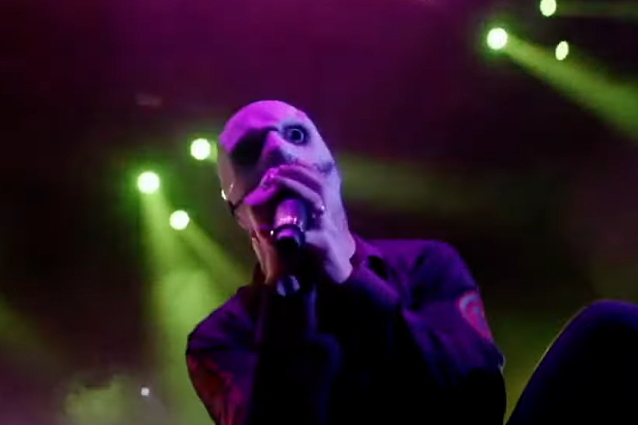 SLIPKNOT performed its new single, “The Chapeltown Rag”, live for the first time ever Friday night (November 5) at Knotfest Los Angeles. The event was livestreamed as it happened, giving fans access to both the studio version and SLIPKNOT‘s live performance of “The Chapeltown Rag” within only hours of its premiere.

The studio version of “The Chapeltown Rag”, which was released Friday morning, was produced by Joe Baressi, who has previously worked with AVENGED SEVENFOLD, QUEENS OF THE STONE AGE and CHEVELLE, among many others.

SLIPKNOT frontman Corey Taylor described the song to Knotfest.com as “a punisher,” saying it documents what happens when the distortions of mass media circulate within the echo chambers of social media.

“It’s classic SLIPKNOT,” said Corey about the track, which is inspired by a Netflix documentary he watched about the Yorkshire Ripper serial killer who murdered multiple women in the West Yorkshire, United Kingdom suburb Chapeltown in the late 1970s. “And it’s frenetic. But lyrically, it’s coming from a point of talking about the various manipulations that can happen when social media meets media itself. And the different ways that these manipulations can try to pull us in different directions, in the fact that we’re all becoming addicts to it, which is very, very dangerous.”

Recorded during recent sessions for a yet-to-be-announced new album, “The Chapeltown Rag” barrels forward with the speed of a freight train derailing and incisively eviscerates Internet culture from the inside out with the scream, “When everything is god online…nothing is.”

M. Shawn Crahan, better known as Clown from SLIPKNOT, added: “‘The Chapeltown Rag’ facilitates a sort of mindset that you’re going to like: it’s along the barnburner side of things.”

SLIPKNOT heralded “The Chapeltown Rag” with a unique and innovative rollout throughout this week. Unbeknownst to visitors, key lyrics from “The Chapeltown Rag” adorned Knotfest.com — the band’s online hub for news, community, and their official fan club, OT9. When users clicked on the lyrics, they landed at www.thechapeltownrag.com. Beckoning fans further down the rabbit hole, www.thechapeltownrag.com featured a series of nine eco-friendly NFTs minted under the user account “desmoines515” and hosted on the carbon neutral WAX Blockchain. New digital assets were revealed each day this week. When assembled, those assets granted the first look at the single artwork, as well as a part of “The Chapeltown Rag”. Fans who collected all nine of the free-to-redeem tokens should stay tuned for various special redemption options and offerings throughout the next album cycle.

“SLIPKNOT has been at the cutting edge, utilizing technology in new and creative ways to engage with their fans,” said Lee Jenkins, product manager for WAX, “and we are very excited that they chose WAX for this initiative that showcases a new way to utilize blockchain technology.”

According to Knotfest.com writer Dan Franklin, “The Chapeltown Rag” chorus sees Corey experimenting with vocal approaches he had never taken before.

“I wasn’t even sure if that part was going to be the chorus, to be honest,” Corey said. “But I just love the way that the chord progression lent itself this weird, chromatic, minor vibe to it, which I had never really done before. I played with it on ‘Vermilion’ years ago, but I had never really given it a little more aggression. The harmony that I created for it was just so fucking weird as well that it just gives it that slight dissonant vibe, but it’s also very, very melodic and hummable. Writing and pulling yourself out of trying to keep it in some sort of structure allows you to just fucking rip the scab off and let the wound be what it is. Then obviously, the big breakdown at the end where it just fucking goes off the rails is is so heavy, dude.”

SLIPKNOT‘s last album, “We Are Not Your Kind”, was released in August 2019. The LP sold 118,000 equivalent album units in the U.S. in its first week of release to land at position No. 1 on the Billboard 200 chart. Furthermore, the album made an impact worldwide with No. 1 debuts in the United Kingdom, Mexico, Australia, Canada, Japan, Ireland, Belgium, Portugal and Finland, as well as Top 5 debuts in Germany, France, Norway, Italy, Austria, Sweden, Switzerland, The Netherlands, Poland, Spain and New Zealand. 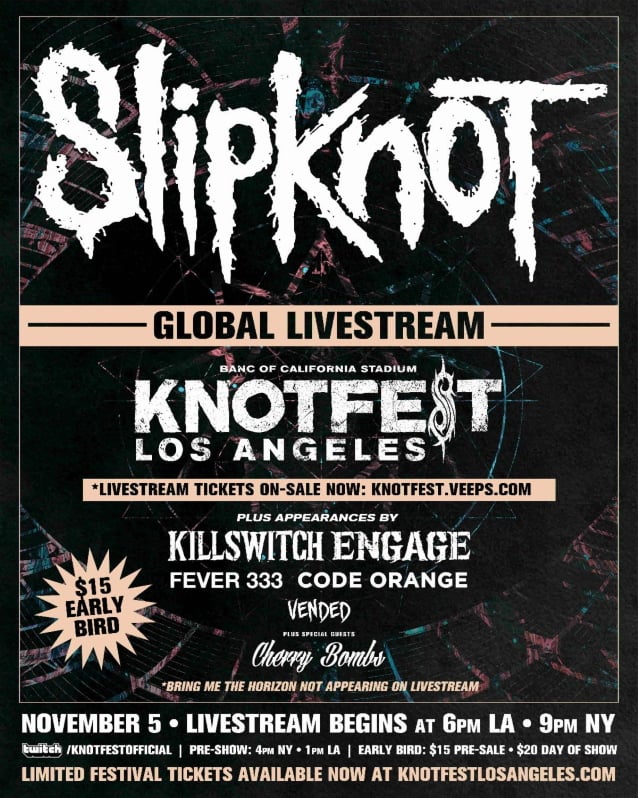